The rambling caves of Bhimbetka are situated about 45 km northeast of Bhopal located by the side of the Bhopal-Hoshangabad road. These caves on the suburb of Bhiyapura village in Raisen district are famous for their Pre-historic past. The northern bounds of the Vindhyachal ranges with amazing rock shelters and paintings is remarkable for its antique riches. Ensconced in the midst of blossoming greenery in intense forests and rocky terrain the rocks safeguard the prehistoric site giving Bhimbetka a magnificent outlook. 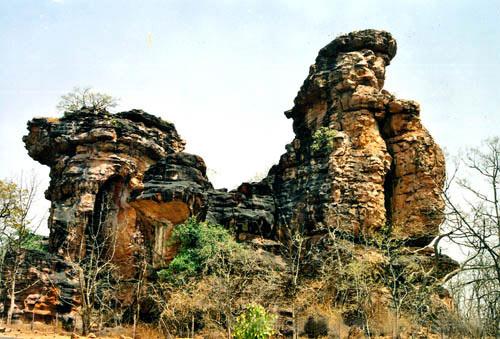 Bhimbetka is an awfully modest place. Stone Age people painted their qualms, trust and other routine life essentials of congregation and hunting society on rocks as their canvas. The uninterrupted forest from Bhimbetka to Ratapani Wild Life Sanctuary gives a prospect for trekking and by this means ascertain these speculate on your way. These natural rock arrangements of enormous sandstone projection were the locale for Stone Age populace. The suspended rock ledges gave them refuge from heat and cold and the neighboring forest was the resource of water, plants, fruits and wild animals. The rock asylum has been painted from the Mesolithic era to the past period with diverse pattern, which reflects incessant traditions and existence.

Bhimbetka gets its name from Bhim-betka or Bhim Baithaka entailing the seating lay of Bhim, the second Pandava and a renowned figure of Mahabharata. It is said that exiled from their realm, they came here and resided in these caves. There are added places in accordance with this hypothesis. It is the similitude in names of the close by places with the names of the Pandavas which turns out to be the foundation of this presumption. One of the villages is recognized as Pandapur, while Bhiyapura itself is supposed to be a deformation of Bhimpura, the adjoining Lakhajuhar forest is thought to be the Pandava's palace. Nevertheless, the actuality of these declarations are yet to be substantiated.

Declared a World Heritage Site the caves of Bhimbetka were discovered in 1957-58 by a valiant archaeologist from Vikram University, Ujjain, Dr. Vishnu S Wakankar. UNESCO illustration proclaims the Rock Shelters of Bhimbetka as a World Heritage Site providing accurate information on its detection at the way in. Bhimbetka acquired its position in the country’s archeological proceedings in 1888 as a Buddhist site. Dr. Vishnu S Wakankar while traveling by train to Bhopal saw some rock structure and visited the location along with a panel of archaeologists and revealed quite a few primitive rock shelters in 1957. The rock refuges have been painted from the Mesolithic era to the Historical era with diverse patterns, depicting incessant ethnicity and existence. It is an implicit primitive view of the rise of human evolution, filled with hunting and war scenes and all varieties of animals such as deer's, buffalos, bears and tigers building it the chief depository of primitive art in the country.

The rock caves at Bhimbetka are lofty from the valley making it reasonably flood defiant, although the caves were waterlogged for an extensive period of time. Some of the caves have the stain of inert water and paintings in such caves were dented to some extent due to steady water flooding. There are few caves which are supposed to be innate shelters of human habitation. Bhimabetaka, through its abundant rock weapons, tools, earthenware, graveyard, human skeleton uncovered from the burial cave and bones of animals, offer substantial proof of primitive traditional human evolution. The primitive man has expressed animals and birds with two or three blows of geometrical figures by using signs and symbols e.g. a trunk denoting an elephant, a stretched feather at the rear symbolizing peacock, and an ornamental horn demonstrating a feminine deer. 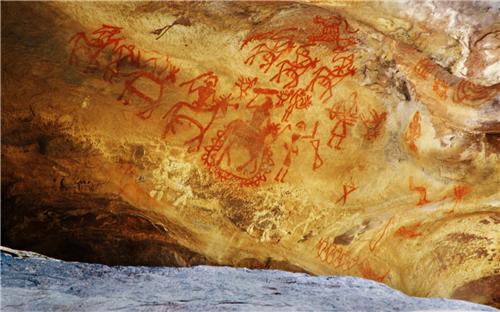 The animals and birds are represented all over either in outline or as a whole by means of geometrical expressions like triangles, rectangles, circles, and hexagons. The common animals are bison, tiger, rhinoceros, elephants, monkeys, lizards, dogs, peacocks, crocodiles etc. One rock cave, widely referred to as "Zoo Rock', portray store of animals like elephant, bison and deer. The other rock shelters has a peacock, a snake, a deer and the sun, two elephants with tusks, hunting panorama with hunters hauling bows, arrows, swords and shields. The existence of the painting of a horse designate that few of the portrayal dates back to several thousand years. But there are added sketch of the Paleolithic age proved by archaeologists, by means of carbon dating methods.

The overlap of paintings into several levels used by diverse people at dissimilar times permitted that the drawings and paintings can be classified into seven different periods.

Period I – (Upper Paleolithic): The paintings in this era were typically drawn using green and dark red colors as liner illustration. The drawings includes animals like bisons, boar.

Period III – (Chalcolithic) Analogous to the figures on earthenware of the Chalcolithic, these drawings disclose that during that period, the cave dwellers get in touch with the farming communities of the Malwa plains and swapped commodities signifying the revolution towards an added elegant communal settlement.

Period IV & V – (Early Historic) the paintings of this cluster have a diagram and enhancing style and are dyed mostly in red white and green. The appearance of riders, illustration of spiritual symbols and the subsistence of scripts of dissimilar periods are momentous exodus from the previous period. The pious way of life is characterized by paintings of Yaksha, tree gods and mysterious sky chariots.

Period VI & VII – (Medieval) These figures are shaped out of geometric linear and additional graphic, but they confirm degeneration and simplicity in their creative fashion balanced to the previous phase owing to group fabrication of custom themes. The colors used by the cave inhabitants were prepared uniting manganese, hematite, and wooden coal. Paintings on the impression of gods like Ganesh and Natraja are a significant contribution of this era.

The caves depict the history in portraits from the itinerant ways of the primitive man to an established farming life, his relations with the additional modern community existing in the close by plain of Malwa; the steady alteration and adaptation into a further cultured lifestyle. Bhimbetka also has walls of a bust bastion, Buddhist stupas demonstrating Buddhist authority in the Maurya era in this area, as well as rock cut beds characteristics of Buddhist Monastry. Various inscription, which date back to the Sunga, Kushan, and Gupta periods, are discovered. Shankha script dedications are seen at several places which are yet to be interpreted.