The industrial devastation that happened on the midnight of December 2, 1984 at Union Carbide India Limited pesticide plant in Bhopal was the most awful industrial catastrophe in the world. The death toll reached as high as 20,000 due to the chronic ailment sourced by the gas seepage. This is an intricate case, concerning critics from all sides condemning the Government of India, U.S. Government, and Union Carbide. This case involves a significant ecological contamination calamity and the legal complexity in international tribunal laws, extradition treaties and non-uniform rules across nations which could be browbeaten by companies.


Background of the Incident

After India’s independence the foremost crisis was to deal with the food scarcity which saw the origin of “Green Revolution”, a policy frame work to increase the cereal grain production in various parts of the country. The then Government of India felt the inevitability for high fertilizer use and increased pesticide requirement thus approving pesticide factories all over the country which resulted in the opening of  Union Carbide India Limited (UCIL) in Bhopal, Madhya Pradesh in 1969. The plant was fabricated as the formulation plant where Selvin Technical Concentrate was imported from United States and unification and grinding was done in Bhopal. The manufacturing of the pesticide Selvin using Methyl Isocyanate commenced in 1980.

On the night of the tragedy water accidentally penetrated the MIC storage cistern where over two metric tones of MIC were stored. The amalgamation of water to the tank was the consequence of an exothermic compound reaction resulting in a swift increase in pressure of and temperature .The heat caused by the reaction, the existence of higher concentration of chloroform and occurrence of an iron catalyst resulted in a fast effect that the gas produced could not be controlled by the security system. As a consequence, MIC and other products in liquid and vapor form escaped from the plant into the neighboring areas sourcing destructive effect on the natives living just over the enclosure. The scrubber deliberated to neutralize any escaping gas by spraying caustic soda was unfilled and the blaze loom designed to burn off the gases was under repair. 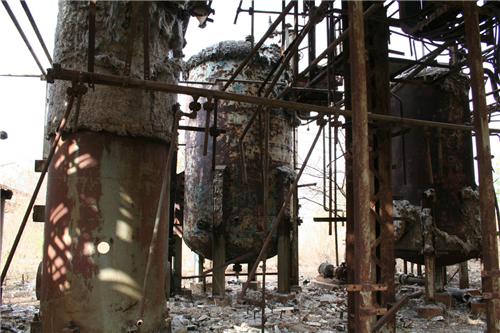 Minutes after the industrial disaster the response were catastrophic. The gas seeped over the city, carried by the breeze into housing areas where working people and well-off were residing, to the railway station, where about 200 people were found deceased. The next day, several thousands were revealed lying dead on the streets of the city, with post mortems revealing exceedingly necroses lungs, and packed with fluid and holes appeared in the lungs due to the chemical reaction. The side effects continue even today which claims 20,000 have died and 150,000 are chronically ill. Women are experiencing gynecological problems resulting in birth of defective babies. For those who survived after the poisonous methyl isocyanate escape, suffered widespread lung damage, blurred vision, chest ache.  Twenty nine years later, the plant site, which was abandoned, still has store of dangerous wastes and outdated chemicals.


Reasons for the tragedy

Reaction of MIC with water produced heat exceeding its boiling point. During the clear out process in the night of December 2, 1984, a small quantity of water went into the MIC Tank. The heat produced by the chemical reaction transformed liquid MIC into gas. The increase in pressure busted the tank resulting in MIC seeps through the vent into the atmosphere.

The UCIL plant was hardly one km from the railway station. As per the Bhopal Development Plan the industries manufacturing pesticides and insecticides should be located 25 km away from the city and people should not live within many miles from the industry location. However these factors were not considered by the organization and the then government

The plant had three tanks to store MIC, each having a capability of 15,000 gallons. It is anticipated that at least one tank should be kept open for emergency purposes, but all the tanks were in use. It is a prerequisite that the tanks should not be more than half full but on the fateful night the Tank  was 87% full far beyond the suggested capacity of 50%. Tanks are required to be kept under refrigeration which was violated. The alarm which was supposed to be set for a temperature exceeding 11°C was set at 20°C.

The scrubber and the flare tower equipped to handle leaks were not functioning at the time of the tragedy. If the safety devices were functional the scrubber would have neutralized the pressure and the presence of water spraying system was turned out late resulting in the escape of gases beyond the level of water spraying capacity of 12 to 15 meters

Severe lapse in the day to day operations, inefficient training programme for operators. The plant was not equipped with automatic leak detection. The minor leak was detected by the employees following irritation of eyes and throat.


Impacts of the tragedy 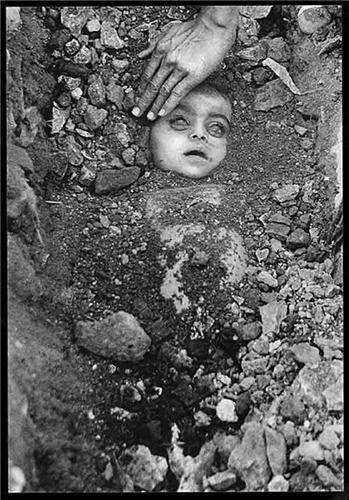 The severe symptoms were burning in the respiratory tract and eyes, breathlessness, stomach pains and vomiting. Those residing close to the plant had very harsh long term symptoms. Far away from the plant the people felt mild irritation in the respiratory passages and eyes. Those who treated patients or dead bodies experienced delayed symptoms although they were not directly exposed to gases. The worst hit was infants below 2 years, old citizens and people with prior pulmonary diseases, like chronic bronchitis and emphysema. The findings exposed change in several organs, but the most distinct findings were associated to the lungs. The lungs were enlarged, showed congestion, hemorrhage and consolidation. There were crucial hemorrhages in the other organs. In addition, the stability of the brain was softened through cerebral edema. The kidneys showed clogging and the liver proved fatty degeneration. Women’s reproductive strength was affected with neonatal mortality rate increase by 200 %. The abortion rate amplified three to four times. Government of India founded Bhopal Memorial Hospital & Research Center in Bhopal to aid and assist those affected from the tragedy.

The toxins released from the unit caused the damage to lungs, brain, kidneys, muscles, reproductive, immunological and other systems. The pulmonary tuberculosis ad other respiratory disorders was highly prevalent. The genital disorders resulted in the next generation also experiencing the same disorders.

The city ground water is contaminated with deadly chemicals including mercury and is considered hazardous for consumption. This toxic waste is caused by activities of UCIL throughout several years of its operation and is not exclusively due to the disaster.

Legal proceedings concerning UCC, the United States and Indian governments, local Bhopal authorities, and the disaster victims began instantly after the disaster. Legal proceedings against Union Carbide dominated the consequence of the tragedy. The Indian Government passed the Bhopal Gas Leak Act in March 1985, permitting the Government of India to act as the authorized envoy for victims of the disaster, leading to the commencement of legal action. In 1985, Henry Waxman, a California Democrat, entitled for a US government investigation into the disaster, which resulted in US legislation concerning the inadvertent discharge of toxic chemicals in the United States. 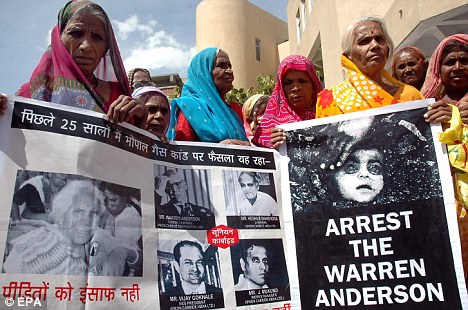 The criminal proceedings which are linked to the 1984 Bhopal calamity was initially filed in 1987, and reinstated in 1991. Warren Anderson, the ex- CEO of Union Carbide, and the Union Carbide Corporation itself face criminal charges in India of “culpable homicide”. The summons issued for trial to both Anderson and the company was continually overlooked and are formally considered “absconders” by the Indian Government.

The Bhopal tragedy is a lesson for both developing and developed nations of world. The developing countries should inculcate contemporary technology to meet the requirements of the population and attain on par with the developed countries. However, if chemical and nuclear plants are to be engaged, supreme concern should be taken to guarantee safety. Given the scientific demands of such up to date production units, security procedures should be more rigorous in developing than in developed countries.


Explore more about History of Bhopal