Bhopal, is well-known for its momentous monuments, splendid mosques, minarets, appealing lakes and overwhelming beauty. This ethnically wealthy metropolitan city has witnessed various stages of Indian history be it ancient, medieval or modern. The city has been home to many eminent poets, academicians, and luminaries. It offers an unsurpassed blend of the old world charm and modern day cosmopolitan life.There is no scarcity of historical and religious monuments for the travelers looking for something extra in the city. In the crowd of many historical building Jama Masjid, Bhopal occupies special place. 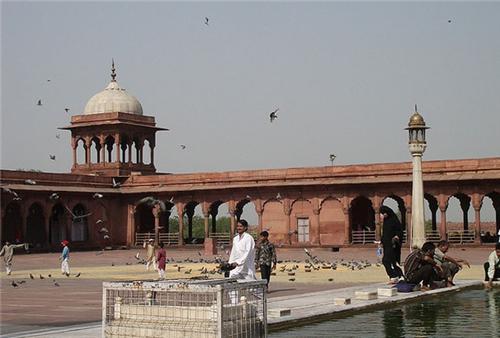 The Jama Masjid in Bhopal is one of the most finest looking monuments with two imposing minarets which can be observed from a sizable distance. This meticulous mosque engages a vital position among the diverse sacred places in the city and is visited by a huge number of visitors every year.The mosque constructed by Qudisiya Begum in 1837 reflects the adroitness of Islamic culture. Every thing from its exterior appearance to fine interiors is simple yet appealing. Having immense significance as a divine place, this mosque is visited every year by large number of Muslims.

The most renowned feature of this fresh-looking monument is the two imposing minarets that are evidently visible to bare eyes even from a long distance. The gold spear crowning the crouch minarets of the Jama Masjid by Bhopal’s first female ruler, Qudisiya Begum, shine peacefully on top of the head caps and shroud swirling all the way through the mesmerizing bazaar. The mosque is an outstanding example of the excellence of Islamic architecture in India. The mosque has three bulbous cupolas, although the most important characteristic of the Jama Masjid is its interior decorations and overwhelming architectural effort which is a fabulous paradigm of Islamic structural design. The mosque is lavishly decked out with a sequence of alabaster-white columned arches that proposes a incredibly eye-catching spectacle with the interior sanctum of the mosque is engraved out of the marble.

This mosque has an airy open courtyard with asylum on its west and domed covered passage (dalans) on its north and south, however the one on the eastern side having been damaged. The sanctuary, which measures 37.49 x 11.73 m., is three aisles profound with an access strip consecutively from north-south. Wings on both sides of the nave each are having a four-sided barrel-vaulted hallway and a square hall at the extreme end, the previous thus being liaison flanked by the nave and the wings in each case. Pebble ribs have been used in the barrel-vault. The nave and the square hall are enclosed by elongated, enormous domes, having padmakosa and Kalasa and amalaka finial. The quibla wall has been lavishly alienated into a sequence of fine-looking mihrabs with well-known ogee curves. The dexterous use of the construction and the sophisticated flavor for superb decorative effect in the structural masses depicts that the construction might not have been built later than 16th century. This Masjid was accomplished in 24 years. It is estimated that the cost incurred to built this masjid was Rs. 60.5 lakhs. This gorgeous mosque has gold spikes in the minarets.

It is located in Loha Bazar and is well-connected via all means of local transportation.

The Jama Masjid Bhopal was expansively modernized retaining the old charisma and its complex now encompasses a pretty small pond. A stopover to this exquisite historic monument offers absolute tranquility and concord.Today Jama Masjid, Bhopal reminds us about the rule of the Begums in Bhopal. It is not only a religious structure but also a special monument of importance that has witnessed the transformation of Bhopal from a princely state to the state capital of Madhya Pradesh.

Click here to learn about other mosques in Bhopal