Apart from being the capital city of Madhya Pradesh, Bhopal is also popular for its beautiful lakes and Mosques. Bhopal has a good number of historic mosques and all of them are worth to visit. Either Taj-ul-Masjid or Jama Masjid or Moti Masjid all the famous for their architectural beauty. In the old walled town these mosques are major source of attraction. The well built Mosques depicts the architectural marvellance achieved by Bhopal .The mosques were the evident cultural impact of the Islamic rulers in Bhopal. The mosques are predominantly present in all across the city of Bhopal. There are three mosques which have raised the standard of the city in terms of architecture excellence. 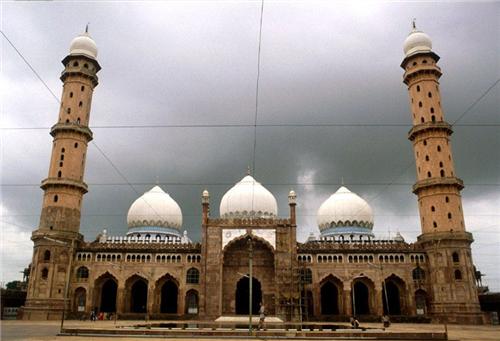 Taj ul Masijid is the biggest mosque in Bhopal. As name suggests ,"Taj-ul-Masajid" literally means "The Crown of Mosques". The actual work during the time of Mughal Emperor Bahadur Shah Zafar by Nawab Shah Jahan Begum of Bhopal. got halted for years due to lack of funds and other reasons like uprising of 1857 in India. Then later in 1971 by efforts of Allama Mohammad Imran Khan Nadwi Azhari and Maulana Sayed Hashmat Ali Sahab of Bhopal the work resumed and the mosque in its final form came into being in1985. The entrance (eastern) gate was renovated grandly using ancient motifs.The dexterity and the architecture show the influence of Mughal culture. The mosque symbolizes the great culture and glorious history of India.The mosque with pink facade, two 18-storey high octagonal minarets , marble domes, beautiful Quibla wall and large courtyard is a thronged by pious Muslims from every part of Bhopal and India.

Epitomizing the beauty, passion and grandeur of the medieval era, Jama Masjid is Bhopal's most famous landmark and a major tourist attraction.The famous Jama Masjid of Bhopal was built under her commission and leadership of Qudisiya Begum, the first queen of Bhopal. Capable of accommodating thousand worshippers it occupies its name amongst most famous religious places of Bhopal. To appreciate its large size are the large minarets and spacious courtyard. The work of the monument was completed in 1837 and opened to public. The unmatched beauty and the charisma of this place can not be explained in words. 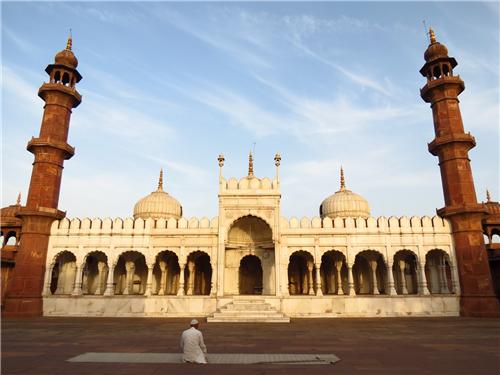 Begum Sikander Jahan , the second queen of Bhopal and the daughter of Queen Qudisiya built this historical and alluring religious structure in 1860. Popularly known as 'Pearl Mosque' it justifies the name given to it. Primarily constructed using beautiful white marbles it is certainly a must visit place in Bhopal. The floral motifs carved at the ceiling, walls and pillars adds to the beauty of this very famous mosque in central India. Through the size of the mosque is not so huge but the structure and appearance is appealing. Moti Masjid is one of the most visited Islamic religious structure in Bhopal and is visited by thousand of Muslim devotees for offering daily namaz. The heart touching architecture of Pearl Mosque has given it a special place in history of Bhopal and India.

The mosques are the not only a religious place in Bhopal. They are the symbol of prosperity and development that Bhopal witnessed in the past. The mosques continue to play a vital role in the unification of society in Bhopal.