Constructed more than 2,000 years ago, the Great Stupa of Sanchi is a symbol of the predominant reach and significance of Buddhism. Being one of the best illustrations of Buddhist architectural exquisiteness in the globe, the Sanchi Stupa is the World Heritage Site chosen by UNESCO. 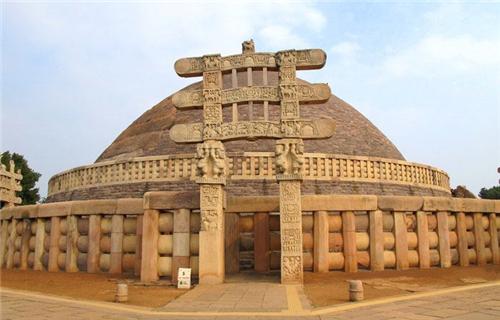 Sanchi Stupa is located 46 km north-east of Bhopal was constructed in 3rd century by Mauryan Emperor Ashoka. Among the Stupas built by the Emperor, the Stupas of Sanchi were preeminent in architectural splendor and magnificence. It depicts the architectural prosperity of the country during that period.

Religious Significance of the Stupa

The structure is believed to be built over the remnants of the Lord Buddha (bones and teeth) giving it a grandiose royal status. The three-layer stone umbrella evident at the peak of the stupa is an indication of the noble status, since the umbrella represents royal status. The Sanchi stupa has a pathway constructed in the midst of the mound to surround the stupa clockwise to honor Buddha. The border wall has an entryway at each direction, and the carvings on these exemplify events from the Buddha's lives.

While in India Buddhism prospered for the first time under the patronage of Emperor Ashoka, an authoritative monarch who built Buddhist monuments all across the country to broaden the religious conviction. Ashoka survived from 304 to 232 BC, and it is during this era that the stupa at Sanchi was initially built. It was restructured between 50 BC and 50 AD, and finished about two times bigger than it had been formerly. It's about 120 feet in width, and 54 feet high. Stupas fundamentally symbolize models of the universe. 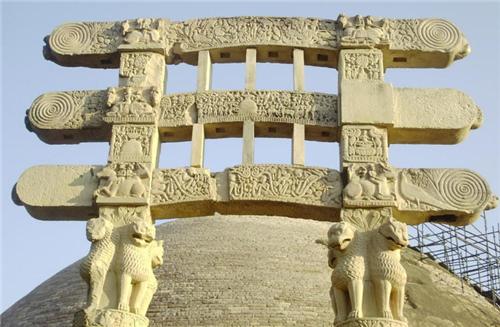 Various gateways of the stupa points to the universal acceptance of the teachings of Lord Buddha. The picture shown on the exterior side of the east gateway is supported by elephants. The upper arch has two trees and five stupas. Central arch of the eastern gateway portray the Buddha's huge leaving when he relinquished his royal stand and happen to be on the streets wanderer probing for utmost enlightenment. Similarly other gateways also reveals other important phases of Buddha life and also his teachings to the general masses. Stone carvings on other gateways depicts seven preceding Buddhas, which are symbolize here in the form of trees, getting devotion and garlands from people attending worship. The top arch demonstrates just five of the seven, because the further two were on the exterior section of the bow which is outside.

How To Reach Sanchi Stupa ?

The great stupa is Sanchi's most significant and prominently preserved monument. It exhibits an ascetic greatness and the beautiful carvings of the entryway portray the momentous episodes and wonders from Lord Buddha’s existence and actions depicted in the Buddhist Jataka tales.

Places of Attraction near Sanchi Stupa